By: Sean O'Shaughnessey
In: Around the web
Tagged: Merck & Co. Inc.
With: 0 Comments 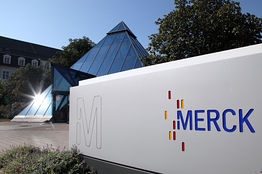 The German company is pinning its health care hopes on successfully developing its anti-PDL1 immuno-oncology treatment in alliance with Pfizer. That puts the pharmaceutical and materials company in one of the hottest, but also most competitive, areas in health care. And Merck doesn’t have an obvious edge.

Merck has been bulking up in more stable, higher-growth areas with last year’s acquisition of AZ Electronic Materials and its yet-to-close €13.1 billion deal to buy Sigma-Aldrich, the maker of life sciences tools.

At the same time, it is ramping up research and development spending to try to take on more advanced rivals like Bristol-Myers Squibb, Merck & Co. of the U.S., Roche and AstraZeneca in immuno-oncology. Up to 20 development programs could start this year, six of which could form the basis of a registration with U.S. regulators.