Saving for Retirement? The Rulebook Is About to Change 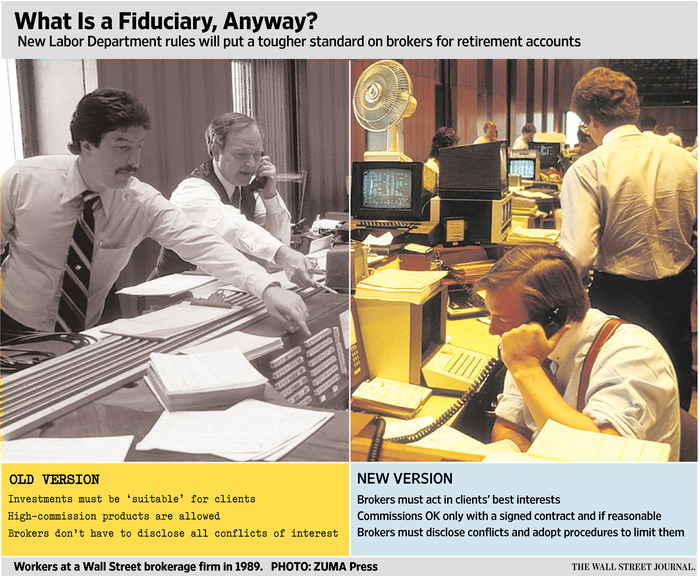 New rules aimed at stockbrokers will have enormous impacts on the way Americans save for retirement.

The rules aren’t coming from the government’s financial regulatory apparatus but from the Labor Department. The Labor Department is releasing final regulations that will require brokers getting paid to provide investment guidance on a retirement account to act solely in the best interest of the investor.

Brokers’ recommendations to this point have only had to be “suitable”—a less rigorous standard that critics say has encouraged some advisers to charge excessive fees, favor investments that offer hidden commissions and recommend securities that can be difficult for investors to sell.

The shift, more than six years in the making, could cut the total costs of investing by billions of dollars annually. But it also will put the federal government deeper into the business of deciding what Americans should do with their own money.

Investors who now pay commissions when they buy stocks or bonds will likely be moved into accounts where brokers collect up to 1% of their assets every year—a change that will compensate brokers for increasing the size of the account, not selling products. A range of popular but controversial offerings like variable annuities, commodity pools and some real estate investment trusts will likely be de-emphasized for retirement accounts. In their place investors increasingly will be offered low-cost index funds that passively mimic market returns. Moving funds from a 401(k) into an individual retirement account could become cheaper, as brokers comply with requirements that the fees are reasonable and the investment strategy is appropriate. And investors who feel they were wronged will find it easier to sue for breach of contract.

The flip side of those changes is that the money-management industry faces its most sweeping overhaul in a generation. Small firms could be heavily pressured by compliance costs, while some large financial firms could be left better off than before.

Mountains of money hang in the balance. Total assets held in IRAs stood at $7.3 trillion at the end of 2015, an amount roughly equal to the combined gross domestic product of Germany and Japan. An additional $6.7 trillion sits in 401(k)s and similar employer-sponsored retirement plans, estimates the Investment Company Institute, a trade group for fund managers.

Changes aimed at how that money is managed could easily spread into the broader market for financial advice.

This will have a sweeping impact. The Labor Department’s new rules on retirement-account advice will touch large numbers of American savers and financial companies.

Source: Saving for Retirement? The Rulebook Is About to Change – WSJ