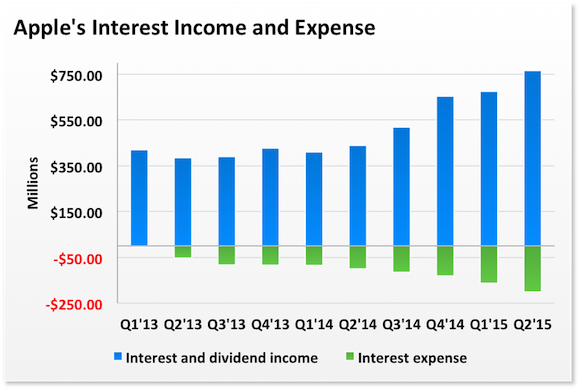 Over the past few years, the richest company in the world has continued borrowing increasing amounts of money from all over the world. Apple's [stckqut]AAPL[/stckqut] debt position has ballooned considerably ever since it launched its capital return program in 2012. Including commercial paper and long-term debt (current and noncurrent), Apple had an incredible $54 billion in debt at the end of the second quarter, a figure that's been steadily rising over the years.

What's more, after the quarter closed Apple detailed plans to raise even more debt capital. The Mac maker sold $2 billion in its first sterling-denominated bond offering in July, then proceeded to sell another $2 billion in so-called "Kangaroo" bonds in Australia as it continues to diversify its credit investor base.

There are many benefits of this debt strategy that have been regularly noted by investors. Apple gets to avoid repatriation taxes since it doesn't need to tap foreign reserves, which now consist of nearly 90% of total cash. It gets to fund its share repurchase program, driving significant earnings accretion. Heck, Apple even gets to lower its weighted average cost of capital, or WACC, by essentially swapping out equity capital for debt capital.

Even with the low-interest environment that we're currently in, all that debt adds up and can cost a pretty penny. Yet here's another reason why investors should love the company's debt strategy: all that debt comes at no net cost.

2015-08-24
Previous Post: Daily Confident Investor Indicator Analysis (incl. $GWR and others) for August 22, 2015
Next Post: Six Things You Should Know About a Stock Market Correction