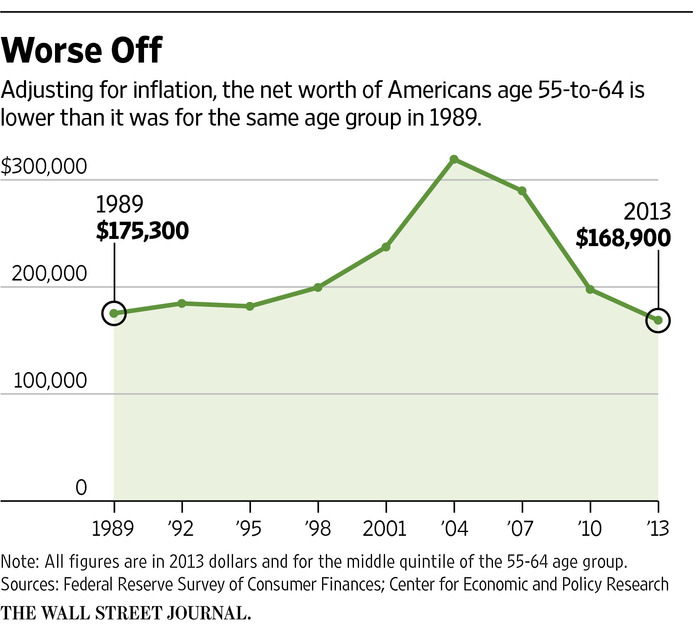 People in the U.S. ages 65 to 74 hold more than five times the borrowing obligations Americans their age held two decades ago, according to an analysis of federal data by the Employee Benefit Research Institute, a nonpartisan, nonprofit policy researcher.

Paying it off won’t be easy. Median savings for U.S. households nearest retirement age has dropped 32% in the past decade to $14,500, according to an analysis of federal data by the Economic Policy Institute, a left-leaning think tank.

The financial crisis weakened many households through lost jobs, pay cuts, home-price declines or a combination of all three. Credit-card debt and medical bills have climbed for many nearing retirement. Some people had children late in life, pushing college tuition costs toward the tail-end of their careers.

“This is the first time where we have seen such a high degree of debt held by people at such a late stage of life,” said Torsten Slok, chief international economist at Deutsche Bank AG.

As a result, many senior citizens will either have to work longer, move to less expensive places or pare back their spending—choices that economists say are likely to put a drag on the U.S. economy.

Debt levels have traditionally peaked for people in their 40s, said Meta Brown, a former senior economist at the Federal Reserve Bank of New York. That is changing. Debt held by borrowers between the ages of 50 and 80 increased roughly 60% between 2003 and 2015, while debt among younger borrowers declined, according to Federal Reserve data.

“We’re in new territory,” said Ms. Brown, who researched debt trends of senior citizens while at the Fed.

Older Americans now have more credit-card debt than younger people for the first time, a reversal from the past, according to an analysis of federal data by the AARP Public Policy Institute. And the amount of student loans held by people 65 and older is accelerating faster than the general population, the Government Accountability Office found. 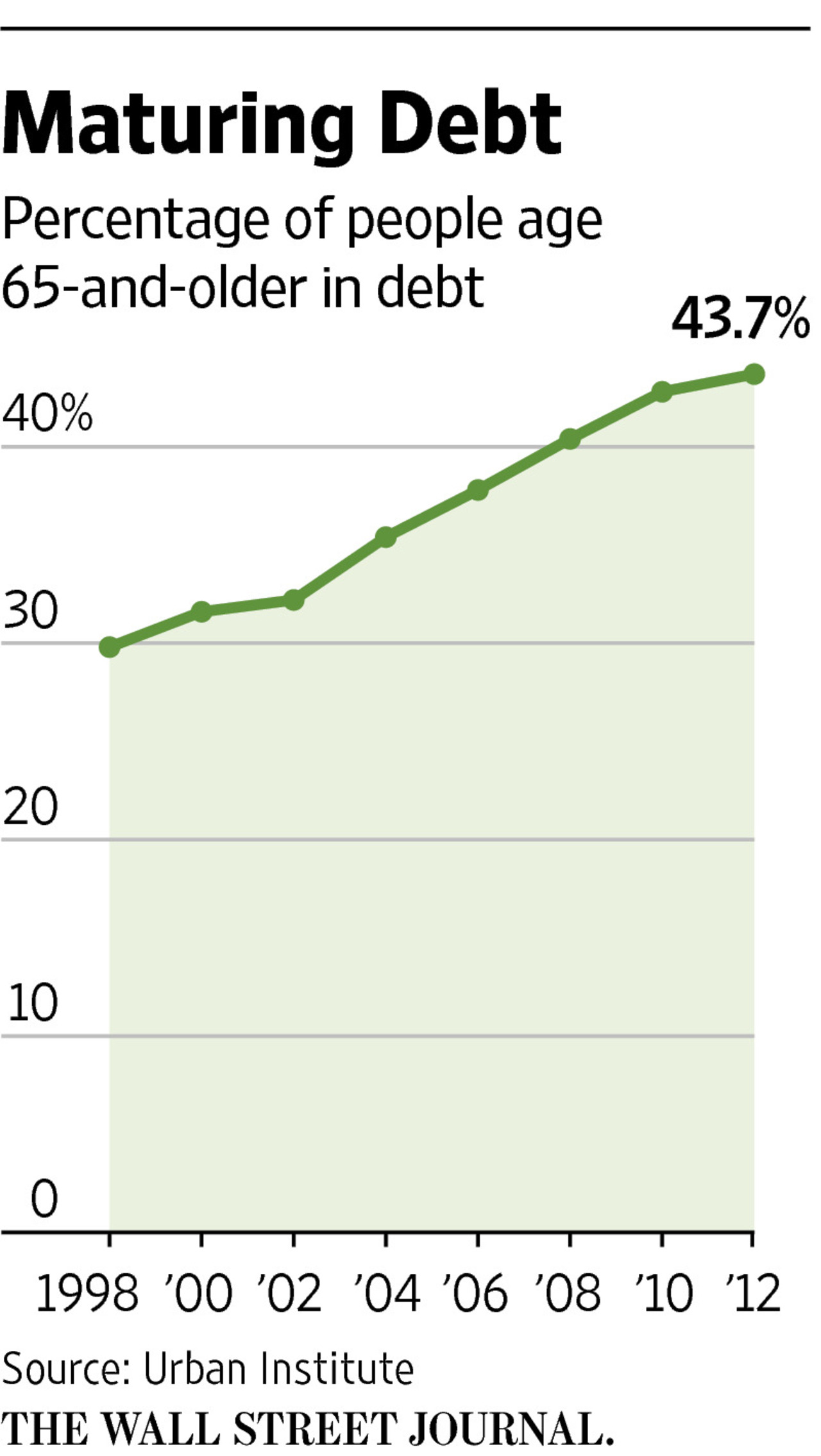 There are conflicting theories about the impact of growing senior debt. Some economists say they aren’t worried because older Americans traditionally have a lower default rate than the general population. In addition, if seniors work past typical retirement ages, they will earn more wages to tax, have more disposable income and gain a few more years to bolster nest eggs.

Yet it won’t be easy for older Americans to keep working. Some 60% of retirees say they left the workforce earlier than they had planned, according to the Transamerica Center for Retirement Studies. Only one of seven of the oldest boomers—many turning 71 this year—have full-time jobs, according to a 2016 Gallup poll.

“The narrative that Boomers would continue to work forever hasn’t turned out to be true,” said Frank Newport, Gallup’s editor in chief.

Some economists say the growing number of penny-pinching older Americans—and a shrinking U.S. workforce—will depress personal incomes and purchases of everything from shoes to houses, hobbling the economy.

“It’s really hard to get out of this slow-growth trap when your labor force is barely growing,” said John Lonski, a chief capital-markets economist at Moody’s Analytics.

“Will they take this debt to the grave? It’s a question begging to be answered,” said Catherine Collinson, president of the Transamerica Center for Retirement Studies.

Source: With $15 Left in the Bank, a Baby Boomer Makes Peace With Less - WSJ